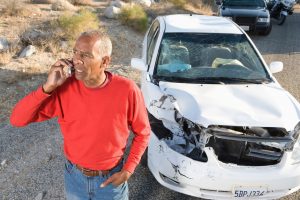 Enduring any car crash is painful enough. But 25 percent of those in Florida car crashes have no one to answer for what happened because the at-fault driver took off or fled the scene. The Florida Department of Highway Safety and Motor Vehicles reports 1 in 4 crashes in the Sunshine State are hit-and-run accidents. There are laws on the books intended to hold fleeing drivers accountable. But even if those drivers are never caught, there may still be several insurance claim options that can help injured persons collect damages. If you’re hurt in a Fort Myers hit-and-run accident, injury lawyers advise taking certain steps to preserve evidence and protect your right to recover your losses from what insurance companies call a “Phantom Vehicle”

An accident is considered a “hit-and-run” when a driver flees the scene without staying long enough to exchange personal information with the other driver (name, address, license number, vehicle registration, insurance information) or to render aid and “reasonable assistance” to anyone who’s injured. Per F.S. 315.062, reasonable assistance can mean simply calling 911 or, in some cases, physically taking the injured person to a hospital themselves.

Strangely, a previous loophole in Florida law actually provided some drivers with an incentive to commit hit-and-runs. Prior to 2014, state law made it a lesser crime to flee the scene of a crash involving serious injuries and/or death than to be charged with DUI manslaughter. So if someone was intoxicated at the time of a collision, there was an incentive to leave; if they could avoid being caught at least until the blood-alcohol level dropped, they’d face lesser charges. That loophole was closed with the passage of the Aaron Cohen Life Protection Act, F.S. 316.027, named after a bicyclist killed in a fatal Florida hit-and-run. (Cyclists and pedestrians are at especially high risk in hit-and-run crashes.) Now, hit-and-run accidents resulting in serious injuries or fatalities are considered second- or first-degree felonies.

While many of those impacted by Fort Myers hit-and-run accidents are heavily invested in the outcome and accountability of the criminal case, it’s important not to overlook your rights in the civil justice system. Such remedies are entirely separate from the criminal case and can be sought concurrently. Where the purpose of the criminal case is to punish unlawful acts, the purpose of the civil justice system is to “make whole” those who have sustained losses due to another’s negligence. In some instances, pursuit of civil damages is all a hit-and-run accident victim has, particularly if the at-fault driver is never found.

Among the types of auto insurance coverage that may prove helpful to hit-and-run crash victims:

This isn’t an exhaustive list. Hit-and-run crash survivors should promptly seek advice from an experienced injury attorney to determine what legal avenues are applicable in their situation.

What Should I Do After a Florida Hit-and-Run Crash?

Hit-and-run accidents can leave you feeling blindsided (literally). You didn’t set out that day expecting to be in a crash, and you certainly didn’t expect to have to deal with the at-fault driver suddenly absconding. If you’re conscious and able, it’s important to keep a cool head and, if possible, take the following steps:

If you have questions about the next steps to take following a Southwest Florida hit-and-run accident, our dedicated Florida civil trial lawyers are available to help you navigate the process.

If you are injured in Fort Myers, Naples, Port Charlotte, Sarasota, or Key West, contact Garvin Injury Law at 800.977.7017 for a free initial consultation.