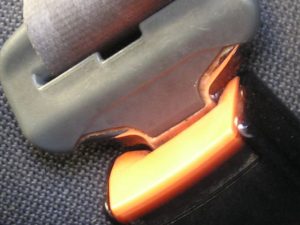 Florida seatbelt laws require all motor vehicle drivers and passengers to wear a seat belt to lower the risk of serious injury and death caused by car accidents. Failure to do so could result in a ticket, but worse, it could be the difference between minor and life-altering injuries. For this reason, courts have held that Florida car accident lawsuit plaintiffs could have their damages reduced if they were not wearing a seat belt at the time of the crash. As our Naples injury lawyers can explain, this is what is known as “the seat belt defense.”

To be clear: Not wearing a seat belt does not kill your case. After all, the cause of the crash probably had nothing to do with whether you buckled up. Where it becomes relevant is the issue of damages or the value of your claim.

As long as another driver was liable for the crash, you still have the legal right to pursue and collect damages for your injuries. However, the amount of money you ultimately collect for your claim may be reduced if you do not wear a seat belt. This is primarily thanks to the pure comparative negligence doctrine that Florida follows.

Per F.S. 768.81, people who suffer personal injuries due to someone else’s careless or reckless actions have a right to file a claim to recover those losses. However, if they shared some of the blame for the crash (or their lack of wearing a seatbelt increased the severity of the injuries that resulted) their damage award is to be proportionately reduced. This is actually better than in some other states, which have held that any degree of shared fault will mean claim dismissal. But you still want to challenge any assertion of comparative negligence to maximize your compensation. (This is where having a good lawyer can really pay off, especially because determining the percentage of comparative negligence is somewhat subjective.)

As noted in the 1996 Florida Supreme Court decision in Ridley v. Safety Kleen Corp., Florida “seat belt defense” poses a question of comparative negligence when the plaintiff failed to use a seat belt. The defense can assert that plaintiff’s failure to wear one in violation of the law either caused or substantially contributed to his or her injuries.

Our Naples Injury Lawyers Can Help

At Garvin Injury Law, we recognize this and other common defenses that can arise in a Florida car accident lawsuit – and we are prepared to help you overcome the challenges. It may require expert witness testimony from a doctor or biomechanical engineer who can establish that the lack of a seat belt did not substantially exacerbate one’s injuries. Plaintiffs who are ejected from a vehicle may have a more challenging time establishing this, but that is all the more reason to work with an experienced attorney who has a track record of success in cases like these.

Our team will carefully assess your case’s facts and circumstances, formulate a strong legal strategy and fight for the best possible outcome with maximum damages in your favor.

If you are injured in Naples, Fort Myers or Key West, contact our experienced injury attorneys at Garvin Injury Law at 800.977.7017 for a free initial consultation.

Settlement vs. Trial: How Do They Compare in a Florida Personal Injury Lawsuit? Aug. 12, 2020, Garvin Injury Law Blog