While May was Motorcycle Safety Month, watching for riders is a year-around job in Southwest Florida.

Motorcycles are incredibly popular in Southwest Florida, probably because we enjoy what is easily one of the best riding landscapes in the country – long stretches of flat roads, ideal weather year-round and captivating scenery. 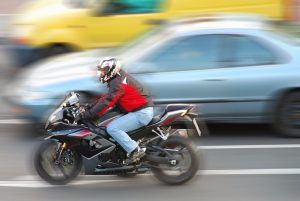 But our injury lawyers in Fort Myers also know Florida is also one of the most dangerous places to ride a motorcycle. The National Highway Traffic Safety Administration(NHTSA) tallied 577 Florida motorcyclists killed in a recent year – by far more than any other state (even California and Texas, which trump Florida in both size and population).

Earlier this month, a 22-year-old died following a motorcycle accident on McGregor Boulevard. The Florida Highway Patrol reported a 34-year-old driver attempted to turn left onto Water Lane, violating the motorcyclist’s right-of-way and striking him. He died in the hospital three days later.

Incidents like this are not only tragic – they are 100 percent preventable. The reality is, most motor vehicle drivers aren’t on the lookout for motorcyclists, who have just as much right to the road as those on four wheels.

Why Do Drivers So Often Violate Motorcyclists’ Right of Way?

So often in motorcycle accident cases, we hear defendants say things like, “I never even saw him” or “He came out of nowhere.”

It’s true that motorcycles have a smaller profile than larger vehicles, but it’s not as if they are invisible; drivers just aren’t looking for them.

As the National Safety Council notes, many drivers fail to anticipate the movements of motorcycles. Sometimes, the view of the motorcyclist is blocked, either by other vehicles or the vehicle’s blind spot.

In an increasing number of cases, the driver was distracted.

The U.S. Department of Transportation encourages motorists to:

Because motorcyclists lack the same physical protections enjoyed by those in a car, injuries tend to be extremely serious. For this reason, damages awarded in civil litigation tend to be substantial, assuming there is sufficient evidence of negligence and adequate insurance coverage. That is: The driver owed a duty of care, that duty of care was breached and the breach caused plaintiff to suffer injury/ wrongful death.

Last year in Indian River County, jurors awarded $9.3 million to a motor scooter driver, against a now-94-year-old defendant, stemming from a crash in 2009. The driver  had admitted liability, but there was contention over how much should be awarded in damages, the Palm Beach Post reported.

Plaintiff had been given just a 16 percent chance of living immediately after the crash. He underwent more than a dozen surgeries to his legs, hip and back – and there are still more to be scheduled. He is limited to walking short distances and relies heavily on a motorized scooter.

This is just one example of the ways in which a Florida motorcycle accident can upend lives. Such cases should only be handled by an experienced injury attorney, dedicated to fighting for you – and taking the case all the way to trial if necessary.

If you are injured in a Fort Myers motorcycle accident, contact Fort Myers injury attorneys at The Garvin Firm at 239-277-0005 for a free initial consultation.

Florida ranks No. 1 when it comes to motorcycle deaths, March 9, 2017, By Carli Teproff, The Miami Herald