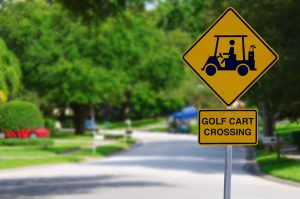 As our Florida golf cart accident lawyers can explain, per F.S. 316.212, golf carts incapable of traveling more than 20 mph aren’t typically allowed to be operated on public roads – unless the roadway has a posted speed limit of 30 mph or less and is specifically designated for golf cart use. Golf carts are allowed to cross portions of a county road intersecting with a road approved for golf carts or a road that intersects a golf course or mobile home park. In any case, the roadway should have posted signs clearly indicating golf cart crossings. Operators of golf carts need not be licensed, but if they’re going to operate on a designated public roadway, they must be at least 14-years-old.

The recent case out of Delray Beach involved an 83-year-old grandfather who died in June after his golf cart was reportedly struck by a car at a crossing near a golf course. The decedent was reportedly crossing South Ocean Boulevard at an intersection with golf cart crossing signs. The Florida golf course accident lawsuit alleges the car driver was speeding, disregarded golf cart warning signs, and improperly passed another vehicle on the road before striking the cart.

According to Palm Beach Daily News, the decedent and his friend had just finished half of their first round of golf and were on their way to the other side of the course – by way of a designated crossing – when they were struck. The posted speed limit on the road is 35 mph. The police reported the defendant driver was traveling somewhere between 45-70-mph at the time of the collision. He reportedly didn’t see the golf cart before it was too late. The cart spun and then flipped. The passenger was pinned underneath, while the decedent was ejected, struck the passenger side of the car and ultimately landed on the road. He later died at the hospital, and is survived by his wife, adult children, and grandchildren.

While the Florida golf cart accident lawsuit is pending in civil court, a state prosecutor declined to press criminal charges. The assistant state attorney said that while the driver was careless behind the wheel, his actions didn’t rise to the level of a criminal offense. Police had initially sought a warrant in the case for vehicular homicide, but the state attorney has prosecutorial discretion. This, of course, underlines a key point in civil litigation, which is that the goals and proof burdens are very different than in criminal court. It isn’t necessary for someone to be charged or convicted in criminal court to prevail in a civil lawsuit. Instead, what is needed is to establish failure to use reasonable care, which is defined as the degree of caution a reasonable person would use in the same or similar circumstances.

The incident was the second in Palm Beach County this year wherein someone died in a golf cart accident with a motor vehicle.

In a recent study published in the journal Traffic Injury Prevention, it was noted that more than 18,000 golf cart-related injuries are reported in the U.S. every year. In looking more closely at these golf cart crashes, researchers analyzed reports from The Villages in Florida over a ten-year period. What they found was:

Almost all of those golf cart crashes that resulted in disability or death happened when golf carts were used on streets or road pathways.

When looking to establish negligence and liability for these crashes, it’s worth noting the 1984 Florida Supreme Court ruling in Meister v. Fisher that designated golf carts to be a dangerous instrumentality. Basically that means that when negligently operated, a golf cart has the same ability to cause serious injury as does any motor vehicle operated on a public highway. As such, it is inherently dangerous. Therefore, the owner of a golf cart may be vicariously liable for operational negligence – even if someone else was behind the wheel. (This often comes into play when a golf cart is operated by a minor or someone who is impaired.)

Some golf cart accident claims may be payable through one’s homeowners’ insurance policy, but it will depend on the circumstances.

Golf course owners/operators might be liable too if there is evidence of a dangerous condition on site or at the entrance/exit that the property owner/manager knew or should have known about and failed to address. This would be a type of premises liability claim.

And of course, drivers on public roadways who fail to use reasonable care resulting in injury may be held liable too. Florida is a no-fault state when it comes to auto insurance, meaning owners of motor vehicles are required to purchase no-fault personal injury protection (PIP) insurance, extending coverage to the insured regardless of fault. However, golf carts aren’t required to be registered or insured, so PIP isn’t a factor. What you will need to establish is the driver’s negligence or failure to use reasonable care. Evidence of violating traffic laws may be used as proof of negligence per se (as a matter of law), though it doesn’t guarantee you’ll win.

It’s imperative in any case involving serious injury or wrongful death that you work with an experienced civil trial lawyer.