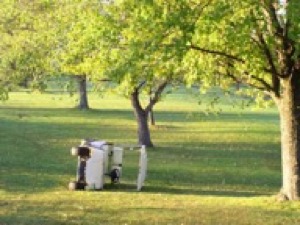 Golf carts are everywhere in Florida, which is somewhat unsurprising given that the Sunshine State is a golfer's paradise with more courses than any other state in the country. But they also commonly zip around gated communities, retirement neighborhoods, and even public streets throughout Fort Myers and Naples. You may spot them too at airports, hospitals, and sporting complexes.

Many residents and visitors utilize golf carts for convenient, short-distance transport and consider them safe since they travel at relatively low speeds. The surprising truth is how common Florida golf cart crashes are and how serious the resulting injuries can be.

At Garvin Injury Law, our Florida golf cart crash lawyers are committed to helping those affected obtain compensation for their injuries and losses.

Why Golf Carts are so Dangerous

There are several reasons golf carts can be especially dangerous. These include:

Golf cart accidents tend to be the most dangerous when they collide with automobiles, tip over, or strike pedestrians. The U.S. Consumer Product Safety Commission reports that some 13,000 golf cart accident injuries require emergency department treatment every year. Some catastrophic and fatal golf cart injuries in Florida in recent years include:

Although the young and elderly are overrepresented in the crash statistics, our Florida injury lawyers urge people of all ages to seriously understand the importance of taking golf cart safety. Recognize too that those hurt may have several legal options.

Many of the same types of negligence claims made in car accident cases can be applied in golf cart accident cases. Distraction, impairment, carelessness, and inexperience are commonly cited.

Potential defendants in these cases include:

Way back in the 1920s, the Florida Supreme Court deemed cars a "dangerous instrumentality," meaning they are considered inherently hazardous or possessing the potential to harm people through careless use. In 1984, the Florida Supreme Court in Meister v. Fisher imparted the same designation to golf carts. That means that a golf cart owner can be liable for its negligent operation – even if he/she was not driving or personally negligent. An owner who grants permission for another to operate their golf cart can be held legally responsible by extension.

Golf cart manufacturers can also be held liable under a theory of product liability if there is evidence a design or manufacturing flaw rendered the vehicle unreasonably safe.

Landowners may be liable if the crash occurred on private property, such as a golf course or country club, and evidence shows some feature of the property was unsafe.

Employers could be held vicariously liable for accidents/injuries caused by their employees acting negligently in the course/scope of employment.

This is not an exhaustive list. It is important to consult with a Florida golf cart crash lawyer about your legal options if you are hurt. The first meeting is free, and you pay no attorney's fees unless/until we win. Typically, the Florida statute of limitations is four years for personal injury claims and two years for wrongful death claims.