UPDATE: Since this writing, the Florida Supreme Court has done an about-face, deciding the more rigorous Daubert analysis will in fact be the new evidentiary standard in Florida cases, both civil and criminal. This will mean the bar to bring – and prevail – in Florida injury lawsuits is raised. In its May 23, 2019 decision  In re: Amendments to the Florida Evidence Code, No. SC19-107, the court (now with three new governor-appointed justices since the last ruling) held Florida’s evidence standard should align with that used by federal courts and most other states. The court previously rejected adoption of Daubert following a 2013 legislative amendment, citing procedural issues and “grave constitutional concerns.” In this 5-2 ruling, the court now says those concerns are unfounded.

On October 15, 2018, the Florida Supreme Court, settled the long-running debate about the appropriate admissibility standard for expert opinions thought Florida state courts.  In a case that began with a plaintiff who developed mesothelioma after years of exposure to asbestos, the Florida Supreme Court held that Frye, not Daubert, is the appropriate test. 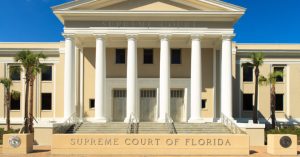 A sharply divided Florida Supreme Court on Monday said a controversial 2013 law about expert-witness testimony was an unconstitutional infringement on the court’s authority.

Florida Justices, in a 4-3 decision, overturned a ruling by the 4th District Court of Appeal and ordered the reinstatement of an $8 million verdict for Richard DeLisle, who argued that he suffered mesothelioma because of exposure to asbestos found in cigarette filters. In the underlying case, DeLisle argued that filtered Kent cigarettes he smoked in the 1950s contained asbestos which leads to mesothelioma.

With this recent ruling, the Florida Supreme Court invalidated the 2013 legislative change to the Florida Evidence Code that adopted the modern Daubert standard for admissibility of expert testimony, this returns Florida to the more lenient Frye standard. Consistent with their positions in a February 2017 rules decision, which declined to adopt Daubert to the extent it is procedural, and their decision to accept discretionary-review jurisdiction in DeLisle, Justices Labarga, Pariente, Lewis, and Quince formed a majority to reject the Daubert standard. Chief Justice Canady dissented, arguing that the Court lacked jurisdiction, with Justices Polston and Lawson concurring in his dissenting opinion.

The Supreme Court’s ruling ends the ongoing uncertainty in the lower courts regarding the proper standard for expert testimony after the Court declined to adopt the Daubert Amendment as a rule of court, to the extent it was procedural. In Re: Amendments to the Florida Evidence Code, No. SC16-181, February 16, 2017. In this previous rules decision, the court found that the case did not present a proper case or controversy for the Court to pass on the constitutionality of Daubert but set the stage for its ruling in DeLisle. Back in July 2017, the Supreme Court voted four to three to accept discretionary-review jurisdiction in DeLisle, giving the Court its first opportunity to directly consider the constitutionality of the Daubert Amendment.

The Daubert standard, which is used in federal courts, was argued that it would help prevent the use of “junk science” in court proceedings. The standard includes a three-part test in determining whether expert testimony can be admitted. That test involves whether the testimony is “based upon sufficient facts or data;” whether it is the “product of reliable principles and methods;” and whether a witness has “applied the principles and methods reliably to the facts of the case.”

Opponents argued that using the Daubert standard in Florida courts would make cases more expensive and time-consuming — effectively making it harder for people to pursue lawsuits. Pariente, in a concurring opinion Monday, echoed those concerns. Many lawyers also argued that when Daubert was involved it consumed additional taxpayer resources and judicial time as lawyers for plaintiffs were forced to have a “trial within a trial” which was required under Daubert to even allow their witness to testify.

Should you or a loved one have a need to speak with a Florida personal injury lawyer who has experience with expert witnesses in both state and Federal courts, please do not hesitate to contact one of our offices in Fort Myers, Naples, or Key West by calling 1-800-977-7017