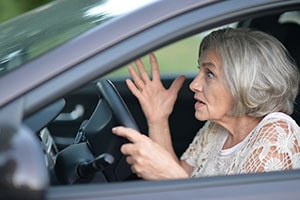 The number of older drivers – and thus elderly driver car accidents in Fort Myers – is steadily rising. People are not only living longer; they are driving longer than any previous generation. Florida leads the nation, according to the Florida Department of Transportation, with those over 65 accounting for 20 percent of the population, compared to an average of 14.5 percent nationally.

Fort Myers car accident attorneys at the Garvin Injury Law know that is going to spike 25 percent by 2040, meaning 7 million people over the age of 65 in Florida – many of them still behind the wheel.

Florida consistently has the highest number of senior crash deaths in nationwide surveys, primarily because a lot of older folks call Florida home. The other reason is older motorists and passengers are more vulnerable to injury when they are in a collision and are often slower to recover and/or more likely to become disabled. Federal statistics show their rate of fatality in crashes is 17 times higher than those between the ages of 25 and 64.

Intersections especially are perilous for older motorists, according to a study in the journal Traffic Injury Prevention, which reported that is where half of all deaths among over-85 drivers occurred. Researchers found those in their 70’s tended to misjudge whether it was safe to proceed through the intersection, while those in their 80’s failed to see the other car.

If it feels like crashes involving older drivers are happening an awful lot more now than they used to, you would be right. The U.S. Centers for Disease Control and Prevention report the number of licensed older drivers spiked 50 percent from 1999 to 2015.

This is not to say older drivers are inherently more dangerous. It is true they face certain challenges to safe driving. For instance, half of the people middle-aged and 80 percent of those in their 70’s have crippling arthritis, which can make it painful to turn and flex. They have weaker muscles and reduced range of motion, making it harder to grip and turn the wheel, press the brake or accelerator or reach to open windows and doors. All this could increase the risk of a crash.

Still, AAA and other researchers over the years have found elderly drivers to be more cautious than younger drivers in many respects. They wear their seat belts, observe speed limits, and they tend not to drink and drive.

But there comes a time for older drivers when handing over the keys is a safety imperative for the driver and everyone else sharing the road.

Injury Lawyers: When Seniors Should No Longer Drive

The problem, as our car accident attorneys in Fort Myers know, is there are not any hard-and-fast rules for when an older driver has reached the point it is no longer safe for them to drive – and it is not an easy discussion to have with an elderly loved one. Many older drivers know that when they can no longer drive, they have lost a huge part of their independence – especially here in Southwest Florida, which lacks an easy-to-use public transit system like those available in metro areas like New York City, Boston, and San Francisco.

The AARP says one’s fitness to drive is less about age than health. A 50-year-old may have health and eyesight issues that necessitate no more driving, while another who is 80 may be perfectly safe behind the wheel.

Many older drivers often start by self-policing their road habits. This includes things like reducing or eliminating nighttime driving, avoiding freeways, or only drive when they know traffic will not be as congested. Some might avoid situations like left turns, which they know (and research has proven) tend to be more dangerous.

The state wields some control but rarely exercises it. Approximately half of all states in the U.S. impose some type of restrictions on older drivers for license renewals. Since 2004, Florida drivers over 80 must clear a vision test to renew their license. Unsafe drivers can be reported to the state anonymously, though it is usually preferable if possible, to have a conversation with the person about their driving.

Other states take it a step further by having older drivers take a road test or obtaining a fitness-to-drive statement from their physician.

If you have some concerns about whether your older loved one should still be driving, personal injury attorneys advise you to have your loved one drive you one day. Watch for:

AARP has a free online seminar called We Need to Talk that has tips on how to broach a sensitive conversation. If you are injured in a Southwest Florida crash with an elderly driver, our Fort Myers car accident attorneys can help.

Call or email the Garvin Injury Law today for your free consultation, and we will evaluate your Fort Myers car accident and determine the appropriate course of action. We have been handling Lee County injury cases in Florida for over 30 years.