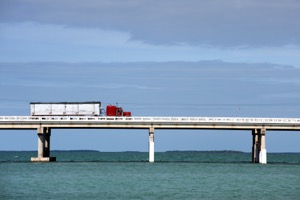 Large trucks are vital to our local and state economy, especially here in the Florida Keys, all the way down to Key West; these same commercial motor vehicles are also incredibly dangerous. Monroe County truck accidents occur at an all too regular occurrence.

Commercial trucks rumble across the streets and highways of Monroe County by the hundreds each day, especially on US Highway 1 (also known as Overseas Highway), the major north-south route that connects the lower and upper Keys with each other - and the entire East Coast to the Canadian border.

Trucks pose a real threat to other motorists, as well as pedestrians and bicyclists.

Some of these could be at least partially explained by the high turnover rate of truck drivers in Florida. According to FDOT, only about one-third remain on-the-job for 2-5 years or more, and many quit within just the first three months. It is undoubtedly a tough job, even considering the decent wages most truckers earn but given the massive size and weight of these vehicles (up to 80,000 pounds), an inexperienced driver behind the wheel of a big rig is a terrifying thought.

Large trucks require 20-to-40-percent longer stopping distance than other vehicles – even more, if the road is wet or the brakes are poorly-maintained. Trucker fatigue is a major factor industry-wide in large truck crashes. The Federal Motor Carrier Safety Administration estimates roughly 13 percent of all truck accidents are the result of drowsy operators. Sun glare is also a big problem for truckers in the Florida Keys and is often cited as a factor in crashes.

Other catalysts for Florida truck crashes include:

The cause of the crash will play a large role in who can be held responsible and to what extent. Florida is a no-fault state when it comes to auto insurance, meaning you can still take legal action against the truck driver/owner even if you were partially to blame.

Our Florida Keys truck accident attorneys are experienced in helping those injured or directly affected by large truck crashes identify all responsible parties, hold them accountable and recover compensation. Just as customers and stores here in Key West, Marathon, Big Pine, Key Largo and Islamorada depend on shipments from the mainland; drivers on U.S. 1 depend on the ability to safely use our roads and also that those driving the heaviest of vehicles are doing their part to ensure a safe commute for all.

Not all claims for damages following a truck accident will require a lawsuit. In some cases, your injury attorney may be successful in negotiating a fair settlement long before it reaches that point.

Even if a truck accident lawsuit is filed, the chances it will go to trial are generally low. Most are resolved in pre-trial settlement negotiations. However, our dedicated civil trial lawyers are committed to seeing the case to a conclusion most favorable to our clients - including trial, if necessary. At times, trucking accident defendants will concede liability but dispute damages, so the trial will only be about proving how much should be paid in damages.

If you are injured in a truck accident in the Florida Keys or are the survivor of someone killed in such a crash, our Monroe County truck accident attorneys can help you examine your legal options and determine the best way forward.