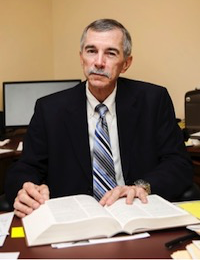 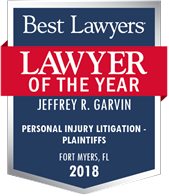 Jeffrey R. Garvin is a Board Certified Civil Trial Lawyer who has litigated catastrophic injury and death cases throughout the country for over 30 years. During that time period he has tried before juries: cases involving aviation, automobile and boat accidents, medical and legal malpractice, defective products and has achieved multiple verdicts in excess of $1 Million. Mr. Garvin has been a member of the Million Dollar Advocates Forum® since 2004.

Beginning in law school Mr. Garvin demonstrated excellence in advocacy by receiving the Best Trial Lawyer Award. That tradition has continued throughout his career and in 2005 he was selected by his peers for inclusion in The Best Lawyers in America ® in which he has been listed in each successive year. He is also listed in Law and Leading Attorneys and selected for inclusion in Florida Super Lawyers ® continuously since 2006. Additionally, Mr. Garvin has achieved an AV® peer review rating from the Martindale-Hubbell group; this is their highest possible rating.

A 1973 graduate of the University of Florida, College of Law, Mr. Garvin is licensed to practice law in Florida, and North Carolina, and has been admitted to numerous Federal Courts and various state courts throughout the country.

Mr. Garvin has been a pilot since 1975 and holds both single engine, multi-engine, and instrument ratings and his hobbies include flying, fishing and skiing. He has been married to his wife, Susan since 1975 and they have two children, Leland with whom he practices law and Daryl who teaches school in Fort Myers.

American Board of Trial Advocates
Past President of the Florida Chapter

Calusa Inns of Court
Past President

Board of Directors of the Academy of Florida