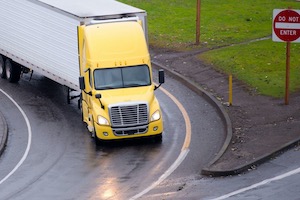 Wide and illegal truck turns have been cited in many Florida truck accident lawsuits , with carelessness being the cause of substantial property damage and severe injuries.

As our Fort Myers truck accident lawyers can explain, large commercial trucks don’t turn the same way as passenger vehicles. As noted by the Federal Motor Carrier Safety Administration (FMCSA), large trucks have a turn radius of 55 feet. In making right turns, these highway behemoths often need to swing wide into the left lane, which allows them to ultimately move into their own lane without running up on the curb. But this maneuver can be especially dangerous at high speeds., at busy intersections or in dense urban or residential areas with narrow roadways.

Wide right turns can result in:

Other drivers should be aware that large truck operators not only make wide turns, but also have large blind spots and long stopping distances. That’s why other road users are urged to exercise extreme caution around them. However, that doesn’t negate the responsibility of commercial truck drivers to operate their rigs with the utmost care and caution.

Unfortunately, in addition to the inherently dangerous wide turns, we also see far too many Florida large truck crashes caused by illegal turns. In Florida, this can refer to a few scenarios:

All drivers are expected to obey any traffic control devices or authorities directing them to do something different than what the statute indicates at a certain intersection/at a specific time, based on local events or conditions.

Who Is Most at Risk When Truckers Make Illegal, Unsafe Turns? 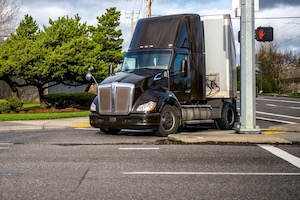 Anyone sharing the road with a careless truck driver is potentially at risk. On average, more than 4,100 people in the U.S. die annually each year in large truck accidents - almost all occupants of other vehicles or pedestrians, bicyclists, or motorcyclists. The disparity in weight between 40-ton semi trucks versus the average 1.5-ton car has something to do with why it’s typically not the trucker who’s hurt in a crash. Still, there are some whose odds for peril are heightened. These include:

Operating a large truck takes training, skill, practice, and great caution. A driver who is unprepared for the road or pressured by an employer to bend the traffic rules in order to reach a destination faster puts others in danger.

Even when the cause of a trucking accident is relatively clear, claims can still be complicated by the severity of injuries, high damages, and numerous defendants (driver, truck owner, carrier, logistics company, etc.). It’s important if you’re injured in a South Florida trucking accident that you consult with an experienced, local personal injury lawyer to ensure your rights and best interests are protected.