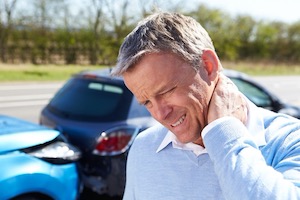 You are waiting at a red stoplight when it turns to green. A split second later, you have yet even to take your foot off the brake when you feel the unmistakable crunch and jolt of a car colliding with yours from the rear. The seatbelt keeps your body in place, but your head jerks forward and just as quickly snaps back. As longtime car accident whiplash injury lawyers in South Florida, we know that approximately 3 million people annually suffer the cervical spine neck injury commonly known as whiplash.

Although whiplash can be from certain kinds of falls, amusement park rides, or a punch to the head, most are the result of low-speed, rear-end auto accidents.

Many do fully recover from whiplash injuries. However, researchers at Harvard Medical School found that half of those affected continue to have neck pain for more than a year after their injury. Roughly 10 percent end up with chronic pain that interferes with work and everyday life. Some suffer through years of severe pain, crippling headaches, and certain physical limitations.

Whiplash or coup contrecoup injuries may be compensable through one's personal injury protection (PIP) coverage, which offers up to $10,000 in coverage for medical expenses and lost wages, regardless of who was at fault.

If your injuries are more serious, there is a good chance you could pursue a claim against the other driver's bodily injury insurance policy. Most cases of whiplash are the result of rear-end collisions, which in Florida are accompanied by the legally rebuttable presumption of fault by the rear driver. That means the driver who struck you from behind is presumptively negligent, though sometimes this is refuted. The rebuttable presumption can make it easier for those with whiplash injuries to prove the other driver's liability and makes it tougher for the other driver to establish a comparative fault against you.

As noted in the 2007 ruling in Dept. of Highway Safety and Motor Vehicles v. Saleme by Florida's Third District of Appeals, a rebuttable presumption in a Florida rear-end crash can be overcome by presenting evidence of:

While fault in a rear-end crash case may be straightforward, establishing damages (the amount of money you are owed) for whiplash injuries is usually more difficult.

While whiplash injuries are very real, there can be some hesitation to these types of injury claims. Some (especially insurance adjusters) doubt that a seemingly minor crash could result in debilitating chronic pain. Whereas most vehicles can withstand an impact of 8-12 mph without any visible damage, whiplash injuries can easily occur at speeds of less than 12 mph, according to the Spine Research Institute of San Diego. Disbelief can be exacerbated by the fact that imaging tests won't always clearly show an issue.

On top of that, there is often 24 to 72 hours before a person suffers noticeable symptoms of car crash whiplash injuries. This is because the brunt of the injury is to spinal structures like the facet joints, intervertebral disc, and the vertebral endplates – none of which have any sensory nerves. Further, one of the key sources of pain – inflammation – takes time to reach its peak.

Women and older adults (particularly those with conditions like arthritis) are known to be at higher risk for whiplash injuries. For those in their late 60s and beyond, this may have to do with a loss of flexibility and strength of muscles and ligaments. This leaves the higher potential for damage when their neck whips back and forth.

This situation can be made worse if a driver has tensed up or is otherwise bracing for an injury that they see about to happen or when their head hits the headrest after it whips backward.

Working with an experienced Florida car accident whiplash injury lawyer is imperative because these injuries are not always easy to establish; many insurance companies often deny them automatically.

Signs and Symptoms of Whiplash Injuries

Indicators of whiplash might not appear immediately, but prompt treatment is imperative.

Some of the most common symptoms of a whiplash injury include:

Some also experience ringing in the ears, blurred vision, trouble sleeping, loss of memory, problems concentrating, and even depression.

If you suspect you may have suffered a Lee County car crash whiplash injury, your first order of business is to seek medical treatment as soon as possible and then to contact an experienced Fort Myers car crash attorney. The sooner you see a doctor and talk to a lawyer, the better your odds of obtaining just compensation.

Our team is committed to exhausting every avenue of compensation for our clients. Call or email Garvin Injury Law today for a free consultation, and we will evaluate your claim and determine the appropriate course of action. We have offices in Fort Myers, Naples, and Key West and have been handling accident cases in South Florida for more than 30 years.