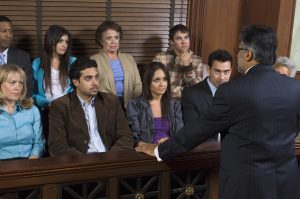 Jurors perform an essential role in the system of American justice, with jury service considered an integral duty of citizenship. Yet every year, about 3/4 of those summoned for Florida jury duty don’t show up, according to The Sun-Sentinel.

In fairness, some of those who skip out are legitimately exempt. What many fail to realize is that skipping out on jury duty is against the law and carries a penalty.

So what happens if you miss jury duty? As our Fort Myers civil trial lawyers can explain, there are two different answers to this: The possibility and the actuality. That said, it is not a service we would advise blowing off lightly.

Before we delve into what can happen if you do not show, let’s touch on how the process works.

In Florida, prospective jurors are selected randomly from the Florida Department of Highway Safety and Motor Vehicles records, which include all residents 18 years or older with driver’s licenses or a Florida Identification Card.

Most jury service stints will last a day or so, if that. This is because many cases do not actually end in a trial. Both Civil and criminal cases are often settled or plea bargained far in advance of a trial, but sometimes these agreements can be reached the morning of trial, in the middle of trial or even as jurors deliberate. Even if you are not selected to serve on a jury trial, as long as you show up as scheduled, the system will consider your jury service obligation fulfilled for the full year. (In some instances, you may be given notice electronically the night before or the morning of that your presence is not necessary. This still counts.)

Under state and federal law, employers must allow their employees time off for jury duty. Employees cannot be punished for serving as jurors, though it is up to the employer’s discretion to pay you during your absence.

Federal courts in Florida pay jurors $50 daily for their service, plus payment for round-trip mileage from their home address to the courthouse each day they serve. Parking fees, tolls and public transport costs are also reimbursed.

Jurors in Florida state court cases receive far less. Statutes allow that for the first three days, if your employer does not pay your regular wages for your service or you are not employed, you are entitled to $15 daily. That gets bumped up to $30/day if you serve longer than that, regardless of your employment status. This, of course, is by no means a windfall and one reason many people try to avoid it, if they can. However, the penalty for a no-show can be much higher.

What Happens if I Fail to Appear for My Jury Service?

F.S. 40.23 holds that failure to attend as a juror when you’re duly summoned can result in:

If you fail to report, you will get a notice in the mail ordering you to contact the jury department. If you reschedule your service and then report on that date, you avoid penalties.

Let’s say you have a vacation or important appointment scheduled on that date. Courts do allow you a one-time postponement for which you can defer service for up to six months. You may even be able to select a referral date.

Now for the question of what actually happens. At least as it pertains to South Florida, contempt of court charges and punishments for skipping jury duty are pretty rare. The Sun-Sentinel reported that in a full decade, only 33 people from Broward and Palm Beach Counties (among the largest for population in the state) faced contempt allegations for ignoring jury service or juror misconduct. In that time, just five people went to jail. A few did community service. For many, the consequence was nothing.

Still, it is worth noting there have been cases where prospective jurors were tossed into jail, ordered to do dozens of hours of community service or had to pay hefty fines as a result of their failure to appear. The problem for most people is they likely do not know much about the judge with whom they are dealing.

Bottom line if you get a summons for jury duty you should step up to the call and do your civic duty as a citizen of the United States; in the event that you have a true conflict, you should reschedule your jury service, which can often do so without penalty. However, if you receive notice that you are accused of being in contempt of court, talk with an experienced trial lawyer for guidance.

Jury duty violators usually got away with it in Broward and Palm courts during last decade, Nov. 22, 2019, By Marc Freeman, The Sun-Sentinel